Most users of Mitsubishi PLC’s are aware of the ability of the PLC programming software to do logic simulations.

This has been a feature of the software starting with GX Developer, continuing through GX Works2, and expanded into the current GX Works3 environment.  The HMI development software, GT Works3, also includes a simulation tool.  In fact, the GT Works3 Simulator and the GX Works2 Simulator can be set up to communicate with each other so that a programmer can test their GOT screen design and their PLC logic prior to the build of the control panel.

When GX Works3 was released along with the iQ-R and iQ-F platforms, a new simulation feature called System Simulation was incorporated into the package.  System Simulation allows your simulated programming logic to interact with other CPU modules via network simulation and with simple motion modules to test the motion control portion of a project.  A programmer can progress much further into the debug portion of a project prior to completion of the electrical or mechanical build.  Once the simulators are running, a programmer can interact with the GOT and utilize all of the same online monitoring tools in GX Works3 as one would with the physical hardware.

The basic steps can be found in the attached video.

GOT Mobile: Setting up HMI screens for remote viewing 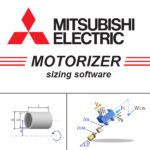 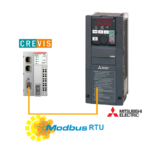 The GN-9372 Programmable IO Adapter from Crevis includes a 9-pin serial communication port with pins for both RS232 and RS485. The port can be used... Continue reading 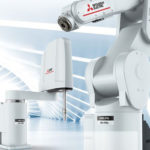 Did you know you can use RT Toolbox3 Simulator to calculate cycle times? The Mitsubishi robot programming software, RT Toolbox3, is equipped with a feature... Continue reading

Quick Tips: Setting an IP address in an E800 Inverter without Main Power